Welcome to my site. Feel free to leave me comments. Be sure to click on images to enlarge view.
All paintings are for sale - contact susanclemart@yahoo.com
At the bottom CLICK ON OLDER POSTS to view more paintings.

God saw she was getting tired and a cure was not to be.
So He put his arms around her and He whispered come with me.

With tearful eyes we watched her suffer and watched he fade away.
Although we  loved her dearly, we could not make her stay.
A golden heart stopped beating. Talented working hands rest. 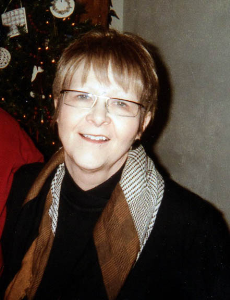 Susan Forsythe Clem, 58, went to be the Lord, Tuesday, November 1, 2011, after a long and courageous battle with Lymphoma cancer. She was born at the Marine Air Station in Cherry Point, NC and lived in Liberty Borough PA, Perryopolis, PA, Westerville, OH and Gahanna, OH. She graduated from the Art Institute of Pittsburgh. Susan worked 32 years as a Senior Graphic Designer for the Kroger Co. Her ads won many advertising/marketing awards including the prestigious FMI award. She continued to pursue her love of fine art, painting in her studio and on locations. Susan is survived by her loving husband, Richard of 36 years; parents, Gerald and Roberta Forsythe of Hilliard, OH; brother, Gary Forsythe and wife, Terri (Bradshaw) of Grove City, OH.; nephews, Grant Forsythe of Columbus, OH, Garrett Forsythe of Grove City, OH.; niece, Christine Forsythe and Kevin Phillips and son, Blaine of Grove City, OH; mother-in-law, Eleanor Clem of Perryopolis, PA; sister-in-law, Peggy (Clem) and husband, Zackary Gray of Largo, FL; nephew, Timothy Gray and wife, Jaime of Louisville, KY; nieces, Jennifer Booth and David Booth and son, Grayson of Raleigh, NC, and Michele Gray of Largo, FL.; and many cousins and friends. 2 memorial gatherings will be held. 2 to 4 p.m. Saturday, Nov 12 at Flatwoods Baptist Church, 104 Griffin Road at Town Country Road, Flatwoods, with memorial service to follow at 4 p.m. officiated by Pastor Darrell Evans.and from 2-4 p.m. Saturday, November 19, 2011 at Dublin Baptist Church, 7195 Coffman Rd., Dublin, OH 43017 with memorial service to follow at 4 p.m. officiated by Pastor Darrel Gabbard.

Susan was born in Cherry Point, North Carolina Marine Corp Air Station to the proud parents of Bertie and Gerry Forsythe. She grew up in the Pittsburgh suburb of Liberty Borough, Near McKeesport. She attended Manor elementary school and said the teachers always said “if you are going to attend Manor school, you will have to have manners”. She had an idyllic childhood where she and her little brother Gary were best of friends and remain so today. After ninth grade, her family moved further south of the Pittsburgh area to the small town of Perryopolis. It was in high school that she begun to think seriously about art. One of her first paintings, a portrait was entered into the Fayette County fair and won First Place. Susan rose thru the Girl Scout ranks to earn one of their highest titles. After high school she graduated from the Art Institute of Pittsburgh with a degree in Visual Communications. At the beginning of her second year she met Rich. He had recently returned from severing four years in the Air Force and was beginning his studies at the Art Institute. Rich is also from Perryopolis. Susan and Rich commuted 40 miles each way to school on a Greyhound bus, so they got to know a lot about each other quickly. Although older he now found himself dating an upper classman. Susan got a job right out of school near where she grew up in McKeesport. She was creating art that was made into transfers and applied to glassware. Then moved to a job designing ads for a local grocery company. After a short stint it was down to the state line to Point Marion and back to the glassware business designing images for all kinds of glass products. …For the artists, this obscure little company once employed Peter Max. It was about this time that Susan and Rich were married. Two years later (1978) they moved to Columbus. Susan found work creating forms for a small printing company. A year later she started work for Kroger, at their headquarters in Westerville, where she designed printed materials for all their marketing and advertising needs. Susan rendered the first images of PePe the penguin. During her 32 years at Kroger her work has won numerous advertising awards. Including the prestigious FMI award. Susan continued her fine art journey in her spare time. She traveled to exhibits, trips to France included as many art museums as they could find. And yes, Monet’s home and studio. Also Matisse and Picaso’s places on the cote d’azur (French Rivera). But, her favorite to visit was Northern New Mexico, where a lot of the great American painters have painted. She loved its land, colors and light.

Rich and Susan were married for 36 years.

Feel Free to Leave a Comment and Share a Memory
Posted by art by susan at 8:03 AM No comments: 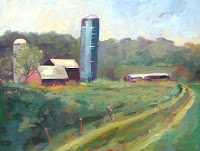 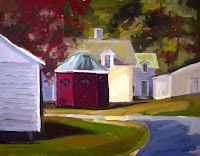 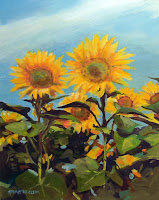 Sunflower Bud
7x5 Oil on Canvas
Posted by art by susan at 11:16 AM No comments: 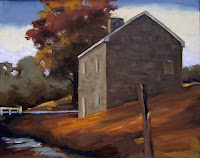 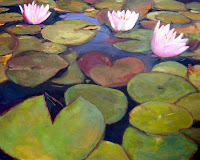 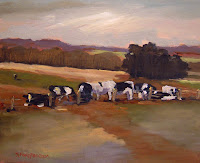 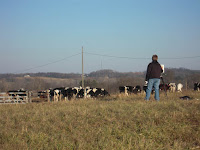 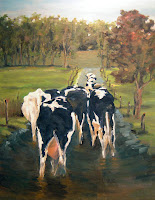 Headed To Pasture
14x11 Oil on Canvas
Posted by art by susan at 5:45 PM No comments: 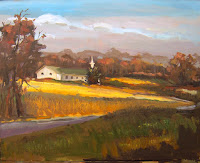 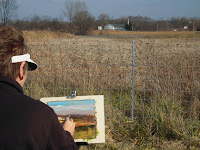 Sunday
8x10 Oil on Canvas
Plein Air
Posted by art by susan at 5:33 PM No comments: 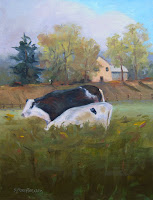 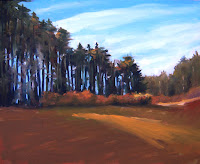 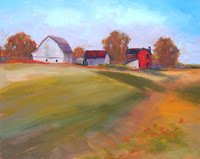 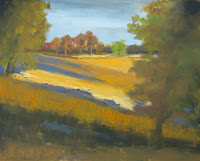 Guardian
12x9 Oil on Canvas
Posted by art by susan at 1:41 PM No comments: 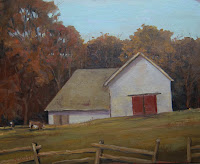 Poetry Of Place
8x10 Oil on Canvas
Alla Prima
Posted by art by susan at 12:18 PM No comments: 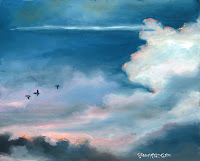 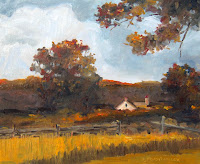 art by susan
Six word bio... So many colors, so little time.